As we continue to mourn the unfortunate and untimely passing of “Nipsey Hussle” aka the “low-key GOAT” from Crenshaw, many people from all races, cultures & backgrounds will firmly admit that they honestly never even knew his music, much less heard of him. Something about that notion feels sad, but then again it also feels like a blessing, because we all learned even more than we could imagine about not only Nipsey, or his real name (born as Ermias Asghedom) or his roots directly tracing to the motherland, or how about his ride or die family members -especially his dear Mother, or the fact that he was a father of 3, dating Actress Lauren London; But I think the most interesting, unknown & refreshing testament to his true character was Nipsey’s heart and love for his community.

Nipsey was clearly heavily involved in becoming a leader not a follower or a victim of his surroundings, which is one of the biggest struggles for many black men ( in particular) the struggle is real. So with that understanding, I will always tip my hat to the underdog -it’s rough, but Nip made it out & with the motivation, inspiration and dedication to his #1talent, making music and writing rap lyrics….well it really made me realize that I hadn’t really heard but 1-2 songs from his last album, which bothered me, so like everyone else after his death, I sat and had my own personal listening party lol.

I. Must say, it was pretty damn epic. I was impressed from his lyrics to the beats and shout-outs, you know that personal touch that some artist are able to pull off -very few. I also definitely appreciate Nipsey’s incredible talent of being a musical genius with the lyrical Midas touch in the studio and crossing over on songs with legends like Diddy, Kendrick Lamar & of course YG.

While I took a slight break from my blog, I do apologize… obviously I wouldn’t want to leave my true followers hanging, but it’s been a busy hectic time. Then with Nipsey being murdered in cold blood, I wanted to write something sooner yet I also didn’t want it to be cliche and basic or a feel of recycled news that was tragic. So with that said, I decided to take a little time away and now felt like the right time to write my feelings on Nipsey as a person, human being and a black man who stayed true to himself, his culture, loved his family, kids, long time girlfriend, friends, never folded under any circumstance, and Nipsey was all about positive vibes, second chances, influencing the youth by also investing in STEM program for the kids of the future, along with the recent opening of his clothing store “Marathon” Real estate, Investments, Film/Acting & of course Music which makes a bad ass business portfolio if you ask me. 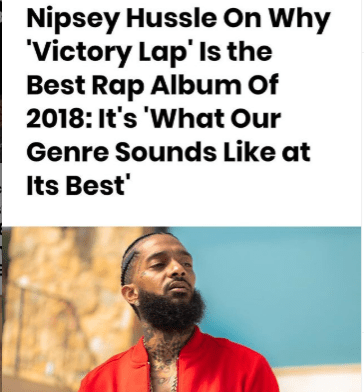 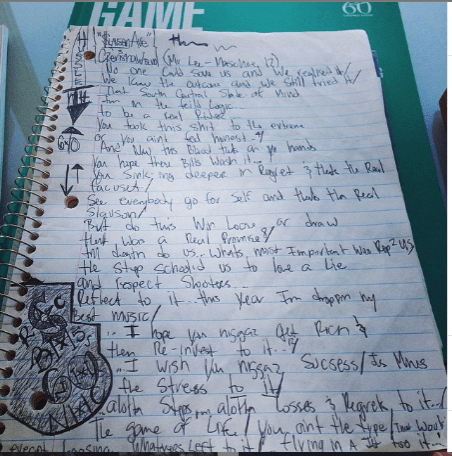 Just as everything was legitimately coming into alignment for Nipsey- career wise, his long time goal actually had already happened, the public just never heard about it. Although I believe we can all find comfort in that because Nipsey was okay with being “low key” or not the lead publicly. I think that says a lot about a person. In general. Sometimes there are things we do for the better repeatedly in life, and a lot of-time those good deeds go unrecognized and/or no credit is given, which some can tolerate for a little while, but as we know he did the job of being a silent leader of influence for the black community, especially Los Angeles or Crenshaw rather. 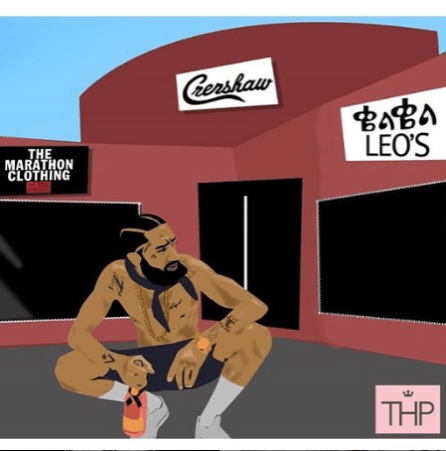 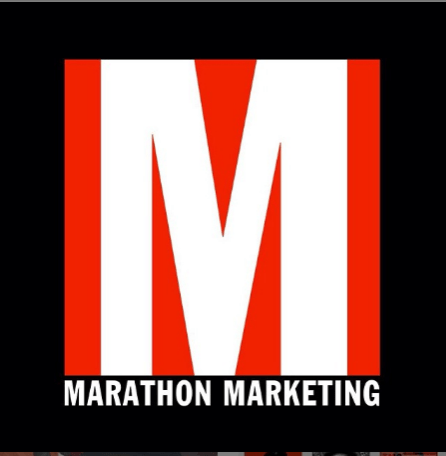 So, with that said let’s go through my fave songs on his album -Victory Lap Below: 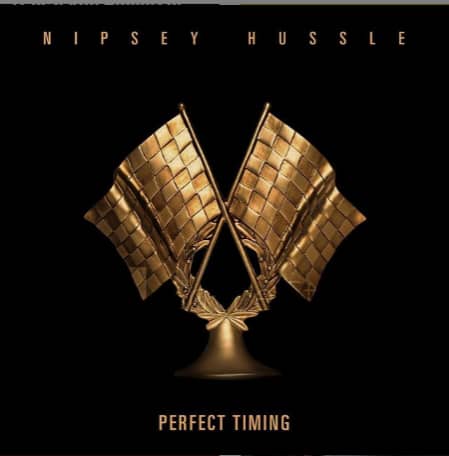 And that about sums it up, and I cant even make this type of stuff up…the whole damn album jams! I honestly didnt realize that I liked every track, of course some took a few more times to hear than others, you know the instant bangers that you hear right away.  I will say I love the melody, lyrics and beats of this album.  I bolded the songs that were definitley my favorites, sooooo you can see I only have 2 songs that I might prob skip from time to time.—thats cray, like amazing cray.  #PROLIFIC is definitely the word to describe Nipsey Hussle #VICTORYLAP!!!  “Its A MARATHON, NOT A SPRINT” 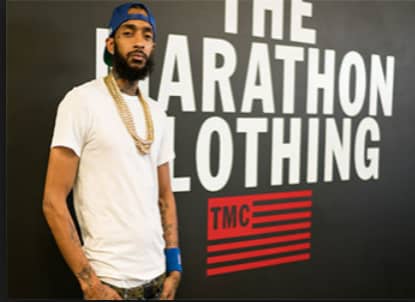 #BUYBACKTHEBLOCK & #PROUD2PAY  along with Nipseys Marathon Clothing Store and STEM kids programs were only a few of his #SIDEHUSTLES, not to mention he bought a hair shop for his longtime Girlfriend and Mother of his son (Actress) Lauren London.

As you can see, he had many plans involving his community that struggled so much with crime, poverty, gangs, and everything that comes with being Black and growing up in the hood.  For Nipsey, it was never about just finding a way to get out, but simply finding a way to position himself to help others, which meant giving back and staying down with his people and where he came from.  I think the most unfortunate thing in this situation is not only did he do everything he set out to, but it happened by the same people that Nipsey would have lent a hand to, our own kind…just sensless jealousy of a hater, but as we say in America we wont be bullied and back down from people or continuing to help others, thats on them.  However,  “Lets try to make a conscious effort to change and think about the way we do things”- Tupac Shakur.  So Fitting, and Im sure NIP, PAC & BIG are collaborating on some dope lyrics as I write this, till then #TMC. 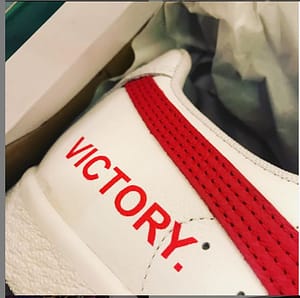 I will also post a few hot tracks or music videos ….some of my favorite bars he spit lyrically, its only right to pay homage to the Late Great Nip!!!  #NEVERFORTTEN

One last thing is about me & my Blog, which if you notice -I rarely post any kind of typical blogger, Mainstream Gossip News, TMZ like News, or any controversy with artists, because that’s not the kind of vibe or how I want my blog to associated in that kind of semi disrespectful negative news. This is 96% percent about MUSIC, The Artist, their Talents, discoveries and the occasional uplifting news like Lebron a James opening his school for the children?. One thing about me, is that I’m not about bringing my kulture down, and yes I’m one of those ppl who agrees with separating the artist from the person, but If you do the crime, you need to do the same exact time as the next man. So in case you wonder why or how I haven’t touched on something, that may fall in my guidelines underneath the section called “Oh, Hell Nawwww!” Jk but I’d love to hear everyone else’s favorite Nipsey VictoryLap songs, and in any order. GOD BLESS! 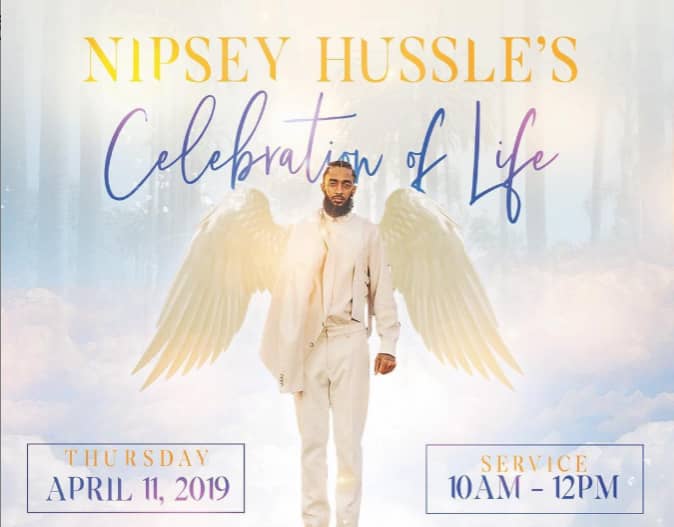 Please hit me up with your top faves, but in any order…feel free to let me know about any other Nipsey jams that go hard from his underground, mix tapes or features on a song from the past.

Sending My LOVE and a Big Thank you!

A SPECIAL MSG BELOW TO MY DAY ONES, NEW ONES & BLOG PEEPS

Again, I know I was gone for almost 3 months from my Jestificated Blogging Community, with no updates and for that I sincerly do apologize, not that I owe any explanation, but simply because I enjoy doing this ….it’s not only my passion but my #1 Blog and you all have stayed down with me throughout the downtime so I appreciate it.  I consider my efforts of passion to write on what I know, like or have ties to a blessing and somewhat volunteer like.  I was shocked to come back and see 180 messages from my contact form, however 70% of those were spam and not appropriate links, so Im telling you now to please only send me relavant inquiries or things that make sense, I will be back to upgrading and weeding out the weirdos sooner than later.  To those who wrote me about partnering, financing & Feedback please know I am still interested in looking into and those possibilities (which I believe I wrote you all back last night).  To future opportunities, please hit me up!  Im a Freelance Consultant now …..you can get to my direct portfolio (which is still in progress) at the following link  Digital Media Portfolio

So Lets Work and Get THIS MONEYYYYYY 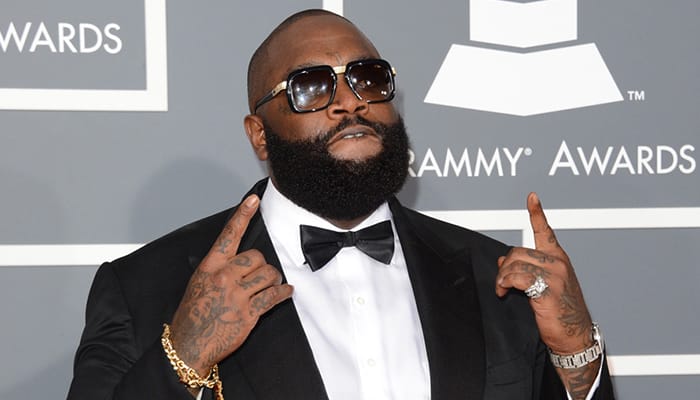 MMMMMMAAYYYYYYBACH – MUSIC !!! RICKY-ROSS “THE BOSS” just released his NEW Album called PORT OF MIAMI 2 this past FRIDAY.  I don’t..